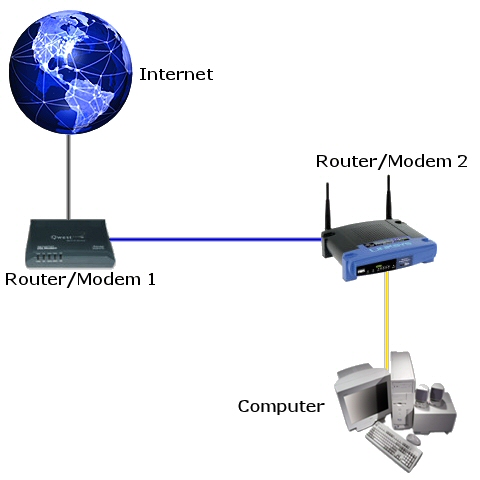 Cable modems often have built-in router (possibly also built-in wireless router). Do you still want to use a different router than the one, which is built into the cable modem, you can choose to turn off the router in the cable modem and connect another router. This means change from "NAT mode" to "BRIDGE mode".

If your ISP (Internet Solution Provider) has chosen not to support "BRIDGE mode", the DMZ (DeMilitarized Zone) might be used instead.

Use DMZ to configure an IP (Internet Protocol) address whose ports are directly exposed to the public Internet or to the Wide Area Network (WAN). Demilitarized Zone (DMZ) hosting is commonly referred to as "exposed host," and allows you to specify a recipient of WAN traffic that Network Address Translation (NAT) is unable to translate to a known local PC or second router. DMZ hosting forwards all the ports at the same time to one computer or second router. The purpose of a DMZ is to add an additional layer of security to an organization's Local Area Network (LAN); an external attacker only has direct access to equipment in the DMZ, rather than any other part of the network.

Any computer or second router whose port is being forwarded must have its WAN DHCP (Dynamic Host Configuration Protocol) client function disabled and should have a static IP address assigned to it because its IP address may change when it is using the DHCP function.

Note: It can not be expected that your ISP (Internet Solution Provider) will provide support for this setup if it fails to work!

Access: This manual assumes that access to the Modem/router and the Second router is available via the device's web-based setup, that is, in the URL (Uniform Resource Locator) address field on your browser to write the device's default IP address, such as for example for Modem/router can be: 192.168.0.1, or for example for the Second router can be 192.168.1.1. When entering the IP Address to a device such as a modem or router with a web-based configuration, you are not connecting to the Internet or have to be connected to the Internet. The device has the utility built-in to a ROM chip in the device itself. Your computer must be on the same IP subnet to connect to the web-based utility.

Changes in the configuration of the Modem/router:

Changes in the configuration of the Second router:

You must now connect all your other equipment to the Second router, after which it should have access to the Internet. Other changes, such as among other things "Port Forwarding" and "Port Triggering" and other customizations in the configuration of your network must also be made in the Second router.

It should be noted that the various menu items and texts may vary depending on the equipment and product it might be.